Liturgy - Then, Here and Now

In May and June of 2012 the "Liturgi-Kal" Choir and the "Barrocade" Ensemble presented an evening called “Liturgy… Then and Now” with Soloists from the choir and special guests from Stuttgart, Germany. The concerts were: Thursday, May 31st at Heichal Hatarbut, Or Akiva and Saturday, June 2nd in the Pavilion Theatre in Jerusalem. The program consisted of: Cantata number 4 by J. S. Bach, and ”Te Deum" by Charpentier, both sung in Hebrew, and "Te Deum" by Arvo Pärt, sung in Latin.

The idea was to contrast the different treatment of the same liturgical text by two composers from different backgrounds, cultures and separated by nearly 300 years. The first; “Te Deum Laudamus” (To You be All Praise) by Marc-Antoine Charpentier (1643-1704) and the second “Te Deum Laudamus” by the contemporary Estonian composer Arvo Pärt were obviously from two different worlds, but each composer honored the text equally in his own musical and artistic lexicon. It was fascinating to discern both the contrasts and the similarities in this ancient Ambrosian prayer from Baroque times to today.

We were honored to have hosted a special group of musicians and singers from the “Laudamus Te” choir and orchestra of Stuttgart, led by Monica Meira Vasques who will also be conducting part of the evening.

It was quite satisfying to work with the Ensemble “Barrocade” on this project. The Barrocade orchestra is one of the most exciting and fresh faces in the Israeli music scene today. The critics have described them as "excellent", "vibrant" and "full of the joy of music". In doing their own programs, this ensemble works without a conductor, each musician has their own voice and the music is an organic product of true dialog between the members.

The third offering on the program was “Christ lag in Tödesbanden” (Cantata number 4) of J. S. Bach, sung in Hebrew. This work, written in 1707 for the Christian Easter celebration, is presented by Bach in seven movements, corresponding to the seven stanzas of the hymn tune of Martin Luther. Bach uses the devices of ‘cantus firmus’ and the chorale form in the last movement. The Hebrew translation reflects the Jewish Passover underpinnings of this Christian feast. 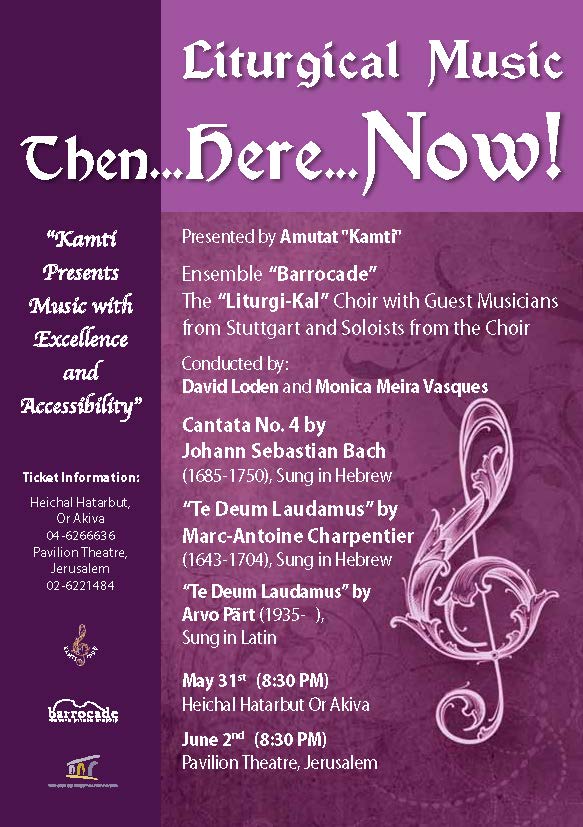